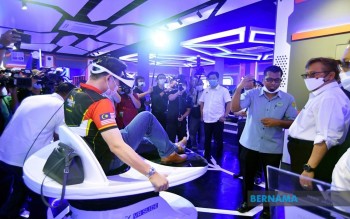 KUALA LUMPUR, Oct 12 — D-Virtual Park, Borneo’s first virtual reality (VR) theme park by Serba Dinamik Holdings Bhd (SDHB), which was officially launched in Kota Samarahan, Sarawak, today is a good initiative by the company to create awareness and exposure among the rural population to embrace the latest technology and use of digital devices and applications.

“In order to be aggressive in the market, we need to be linked to the market.

“Therefore, we must use the linkages to the market, namely by promoting the use of blockchain, the link that is chained to the world,” he said in speech at the launching ceremony