While Bethesda has a mixed reputation among video game enthusiasts — its big open-world games are notoriously buggy; the last couple of Wolfensteins were deeply flawed; and 2018’s multiplayer Fallout 76 was a notorious near-total misfire on its debut — it remains one of the biggest companies in the industry. This year’s Doom Eternal, the hotly anticipated sequel to 2016’s reboot of the foundational first-person shooter series, is estimated to have sold at least 3 million copies at launch, and the last game in the Elder Scrolls series, 2011’s Skyrim, had sold at least 30 million copies by 2016.

Today has been one of the defining moments of the ninth generation of consoles. While video game development cycles are long enough that we still haven’t seen the entirety of the knock-on effects from Microsoft’s last few major acquisitions, we can make a few informed guesses now about what this means for the industry and the medium.

Microsoft has gone on a buying spree in the last couple of years, scooping up a wide variety of independent American and European video game developers. By buying ZeniMax/Bethesda, Microsoft has expanded the Xbox Game Studios network from 15 to 23 studios, which includes id Software (Doom, Quake), Arkane (Dishonored, Prey, the forthcoming Deathloop), Tango Gameworks (The Evil Within, the forthcoming Ghostwire: Tokyo), the mobile game studio Alpha Dog (Monstrocity: Rampage), and MachineGames (all of the Wolfenstein games since 2014).

When combined with Microsoft’s other recent acquisitions, this promises to put a frankly insane number of studios and franchises directly under Microsoft’s control, some of which are tentpoles for the entirety of the modern video game market. A single company will own Minecraft, Doom, Halo, Fallout, The Elder Scrolls, Battletoads, Killer Instinct, Psychonauts, Age of Empires, Wolfenstein, Wasteland, Perfect Dark, Hellblade, and more. If you sat down and made a list of the overall top franchises in video game history, some of which have spent decades and generations building up their IP, Microsoft will easily own a quarter of them.

On a slightly sillier note, the Bethesda acquisition now means that Microsoft actually has enough characters on tap to populate its own giant crossover game. Nintendo has the Super Smash Brothers franchise, and Sony had PlayStation All-Stars; now Microsoft can go ahead and do its own king-of-the-hill fighting crossover that only includes characters that it owns outright. The Master Chief, the Doom Marine, the Sole Survivor, the Dragonborn, B.J. Blazkowicz, Joanna Dark, the Battletoads, Raz, Steve the Minecraft guy, and more can now duke it out. Frankly, if no one at Microsoft has had this idea yet, I’d be shocked. It’s just leaving money on the table.

With any other console manufacturer, past or present, you’d expect this kind of a deal to involve some amount of exclusivity. With Sony or Nintendo, an acquisition of this magnitude would’ve come with the assumption that Bethesda’s various franchises, from this point forward, could now only be played on their owner’s platforms.

Microsoft doesn’t seem to have that issue. Most of its Xbox “exclusives” are also playable on PC via the Microsoft Store, which is built into every installation of Windows 10, and many — including Halo Infinite, to my surprise — are or will be available for digital download via Steam. You can even play Minecraft right now on the PlayStation 4, and the Microsoft-published Ori and the Will of the Wisps is now available for the Nintendo Switch.

That doesn’t mean that its various recent acquisitions have no value to Microsoft, of course. With Bethesda’s track record in particular, it’s not a question of whether or not Microsoft makes the money back, because it absolutely will. The next Elder Scrolls game would need to be an apocalyptic disaster in order to not be a blockbuster, and now Microsoft gets a big piece of that.

You won’t necessarily have to buy an Xbox to play these games, however, and that flies in the face of industry precedent. Microsoft’s acquisitions are more about area denial—it gets to decide whether or not these games show up on competitors’ platforms, if they do at all—than an argument in favor of purchasing an Xbox. It’s weakening Sony’s position, not strengthening its own.

The absurd value of the Xbox Game Pass

It bears repeating: at this point, the Xbox Game Pass is probably the best value for money in the modern video game industry. Between a rotating assortment of indie games, some AA and AAA third-party standards, and day-one access to all Xbox Game Studios releases, you get a lot for your subscription fee. Adding the next big Bethesda games to the Game Pass on launch day is a massive point in its favor, especially its next big single-player open world like Elder Scrolls or Fallout.

With one of those open-world games, it does push the Game Pass into a space where it makes more sense to consider the subscription as not so much a “Netflix for games” as the ultimate in “try before you buy.” A Skyrim or Fallout 4 is the sort of game that is only over when you get sick of it; people have put hundreds of hours into them, and it’s likely that any game of that type would leave the Game Pass rotation long before a subscriber is organically done with it. While you do have to install Game Pass titles to your Xbox hard drive, they only remain playable after that for as long as they’re on the Pass and you’re subscribed to it… unless you buy them after that point.

This also opens up Bethesda’s games to, as some have pointed out (h/t to Kate Sánchez), a lower-income demographic that ordinarily wouldn’t have had access to them for years, if at all. Bethesda’s big games tend to be foundational experiences for the entirety of the games audience; the moment Skyrim came out, everyone in games started making “arrow to the knee” jokes and really haven’t stopped ever since. With Microsoft All Access providing a cheap Series S and an attached Game Pass subscription, it opens up Bethesda’s games to a wider segment of the overall gaming audience.

Most companies wouldn’t have had the financial wherewithal to pursue a deal like this at a time like this. With the launch of the Xbox Series X less than two months out, Microsoft is only now preparing to see some return on years of research and development. In theory, the Xbox project is in the red at the moment, but just the same, it’s dropping eleven figures on major acquisitions. The $7.5 billion it’s spending on Bethesda ties with GitHub as the third-largest deal in its history, behind LinkedIn and Skype. 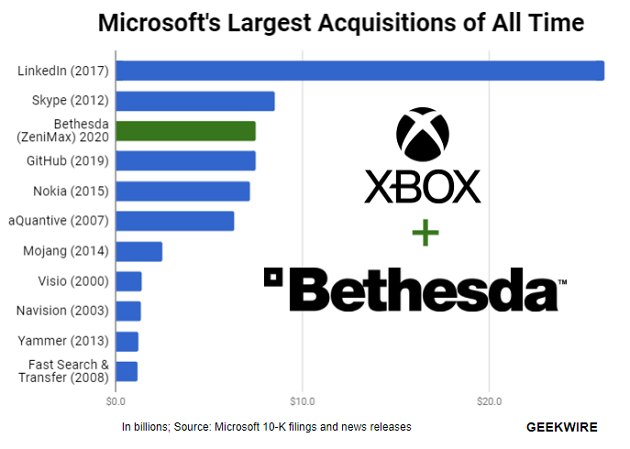 It’s hard not to see this as a flex. By way of comparison, Nintendo is regularly profitable but has no side hustle; its game and game-related franchises are all it has. Sony has a lot going on, in and out of its media franchises, but its overall business strategy with PlayStation has always been somewhat conservative; it probably could withstand substantial risks for its PlayStation project without impacting its overall viability, but it doesn’t want to.

Then there’s Microsoft, which just dropped a dump truck full of mixed bills on Bethesda at what is ostensibly the Xbox department’s greatest point of financial vulnerability. If corporations were people, it just used a burning hundred-dollar bill to light its cigar.

Analysts have traditionally had a hard time with the greater video game industry, as its major players aren’t reliably known for making the most obvious choices before them. Nintendo is notorious for doing basically whatever it feels like at any given time, and now Microsoft seems content to beat the market into submission with its pocketbook. Now nobody quite knows what’s going to happen, and that’s a disruption all its own.

In the short-term, Microsoft’s acquisition of Bethesda is profitable for it, potentially beneficial for customers, and will be a major factor in how the ninth console generation develops. However, it does take one of the biggest independent developers in the world off the board, and that’s the kind of move that has some worrying potential consequences.

Microsoft’s basically infinite budget has fueled the rumor mill for years. Name a big third-party developer, and someone somewhere has theorized at one point that Microsoft would buy it. Now it’s opened up its wallet and bought a company that was big, well-funded, and currently operating well in the black; it didn’t exploit a vulnerability to get Bethesda, but simply showed up to the negotiations with a blank check and a pen.

As a general rule, the video game industry has a massive pool of developers at any given time, from one-man studios up to giant corporate behemoths. The talent is always there. As the industry continues to mature, however, the big franchises have become concentrated in fewer hands. Right now, there are really only a handful of platforms that matter in this conversation, with three consoles, two major digital distributors for PC games, and somewhere well in the back, Google Stadia.

While Microsoft is the only major player in the games industry that can afford to throw money around like this, it’s still setting a series of dangerous precedents, much as with Disney’s acquisition of 20th Century Fox last year. If Microsoft’s investment in Bethesda pays off, it could set off a feeding frenzy, where big-name studios contract until the AAA games market is concentrated into a relative handful of power players. This has arguably happened several times already, such as how many of the current third-party Japanese studios (Square Enix, Koei Tecmo, Namco Bandai, Sega) are overtly or technically the result of mergers, but this could set the stage for a second, harder contraction.

There’s a lot of room for this to backfire, if not for the studios themselves, then for consumers. The eighth generation of console games have already had an issue with a sort of uniformity of design, where many of the AAA titles on the market have felt distinctly similar; everything seems to have big open worlds with capture points, crafting mechanics, combat with time-sensitive parries and dodges, and so on. The fewer major players there are, the less room there is for creative risks and high weirdness, and the latter is a more reliable source of video game innovation.

Right now, though, theorizing is all we have. For now, it means the Xbox Game Pass will become an even better deal than it was on Friday, and whenever the sixth Elder Scrolls game comes out, it probably won’t be on the PlayStation 5. The rest will have to unfold over time.