Amazon applied science manager Dr. Nashlie Sephus has lived in New York City, Atlanta, Silicon Valley, and Seoul while pursuing her education and work in machine learning. She knows the look of a community that’s thriving from technology and innovation, but she didn’t see that growth happening in her hometown of Jackson, Mississippi. That’s why last week she concluded an 18-month process by signing contracts to secure 12 acres of land that will be home to the Jackson Tech District.

The Bean Path, a nonprofit organization created by Sephus, will operate a maker and innovation space on the land. There will also be restaurants and residential lofts spread across eight buildings, all located near the historically Black Jackson State University.

The Bean Path’s expansion in Jackson, a city with one of the highest African-American populations per capita of any city in the U.S., is the latest example of a Black tech organization building community amid ongoing conversations about racial injustice. This growth comes as tech companies have publicly committed to diverse hiring practices after years of little to no progress while releasing statements that mention race but demand no action from people who benefit from racism and white supremacy.

Sephus told VentureBeat in an interview earlier this year she hopes the demands for racial justice that inspired the biggest protests in U.S. history will lead hiring managers who work with engineers and scientists to take genuine steps to diversify their teams.

The Bean Path was founded in 2018 to seed technical expertise in Mississippi and do things like advise startups on their technical roadmaps. It aims to include people who haven’t worked in tech or who didn’t go to a prestigious college or attend college. The Bean Path’s in-person events initially focused on Jackson, with office hours held in local libraries. Virtual office hours made necessary by COVID-19 mean The Bean Path now works with people across the U.S. Once the Jackson Tech District opens, the group plans to host co-development sessions and conferences with other organizations. Sephus is also working with a group to open KITTLabs for Black developers in Atlanta this fall. 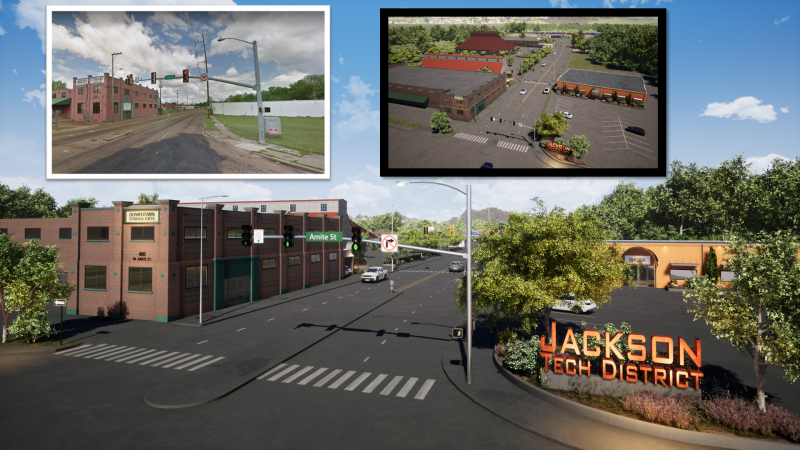 Above: A rendering of the Jackson Tech District

Sephus came to Amazon in 2018 following the acquisition of Partpic, where she served as CTO. In an interview with VentureBeat earlier this year, Sephus said she’s happy if her accomplishments inspire young professionals to enter the field or apply to Amazon, but she’s looking forward to the day when being a Black female machine learning scientist working at Amazon is not a rarity.

“I’m not proud at all when I say that I am one of the only or very few; it’s literally just a reminder to people who are in charge of these decisions that this is the reality,” she said. “I think that change with these companies and these types of technologies have to be pressured from the outside, as well as from the inside. And so as someone who is on the inside, I know firsthand what it takes to make change — it takes a lot. And so I’m dedicated to keep fighting for what I believe in. Again, I just encourage folks to do the same. I think we’re headed in the right direction, but it’s going to take a lot more stakeholders to come together and hash out some of these issues.”

In June, Sephus joined more than 100 Black tech professionals and 100 allies in signing a public letter released about a week after George Floyd’s death. The letter was published by Black in Computing, a group that maintains “when one of us is traumatized as a result of inequity and racism, all of us are traumatized.” The letter calls the tech industry “oblivious, complicit, or indifferent” to the discrimination Black technologists encounter and calls for a series of actions, like the creation of unbiased working environments that allow people of all backgrounds to prosper.

“We know that the advances of computing are transforming the way we all live, work, and learn. We also know that we cannot ask for equal opportunity for anyone without demanding equal opportunity for everyone. We know that in the same way computing can be used to stack the deck against Black people, it can also be used to stack the deck against anyone,” the letter reads.

Black in Robotics held its first official meeting last Friday to gather ideas from initial members, but the group began to take shape in June after a panel conversation about race and robotics held by Silicon Valley Robotics.

In opening remarks, Georgia Tech professor Dr. Ayanna Howard said that systemic racism in the tech industry is a problem, but as AI and robotics become more common, systematic bias and other negative aspects of technology will impact the rest of the world unless we can change course.

“If we do it right, it means that we leave the world a better place. And I think as a roboticist, this is the reason why I still remain a roboticist, still build my robots and program them and work with people, is because I truly believe that as roboticists we can impact the world and change it,” Howard said.

Maynard Holliday is a co-organizer of Black in Robotics and wrote the group’s mission statement. His credentials include working with robots deployed to help contain radioactive fallout at Chernobyl. A senior engineer at the RAND Corporation, he currently works with federally funded research and development centers for the military. He said he knows from his long experience in the industry that the problem is bias in hiring, not pipeline issues.

“I’ve been working 30+ years in the field and have been the only person of color in almost every situation, whether it be in industry or in my role at the Pentagon in the Obama administration, at national labs,” Holliday told VentureBeat in a phone interview. “I’m at the point of my career where I’m at the end of it and hopefully cruising to retirement, but I want to see the community flourish.”

In another development, African AI researchers have written a number of works in recent months about creating AI in the spirit of anticolonialism AI and Ubuntu, the African philosophy of interdependence.