To the average cocktail lover, the action behind a bar counter can seem full of magic and mystery. There’s a quick sprig of this and a small splash of that, followed by loud, vigorous shaking or a few stirs, then out pours a perfectly formed beverage. At first sip you know: There’s no way you could make anything this good at home.

Lately, with the weather getting cooler, and no end to this pandemic in sight, many of us are missing our neighborhood haunts. Though some bars are selling cocktails to go, many of us are on our own. If we want to drink a perfect Negroni this Halloween, we’ll have to make it ourselves.

To help unravel the science of drinking, Discover talked with Kevin Liu, author of Craft Cocktails at Home: Offbeat Techniques, Contemporary Crowd-pleasers, and Classics Hacked with Science. He’s also the co-owner of The Jasper in Richmond, Virginia, which was recently named one of the best new bars in the South by Garden & Gun magazine.

To Liu, the old-fashioned is a perfect example of how chemistry and science come together in drink making. The drink has just three ingredients: sugar, bitters and whiskey (or brandy, if you’re from Wisconsin). “You look at that recipe and you’re like, ‘Why is this hard? How can you even say that one place makes a better old-fashioned than another?’” he says.

But there are hidden variables in even a simple drink that can make the cocktail taste terrible at one bar and divine at another. And the difference isn’t just the quality of whiskey. Subtle differences in serving temperature change the flavors and aroma. And if you put in the ice too early, it will start to melt, changing the drink through dilution. Even just a couple dashes of bitters can be the difference between something sickly sweet and a drink that’s perfectly balanced.

Amateur cocktail aficionados often obsess over ice, but not usually in ways that matter, Liu says. These days, spherical ice “cubes” are all the rage because they can cool your drink without diluting it as quickly. They’ve gotten so popular that some new models of household refrigerators can even make them. But to create a perfect cocktail, you’ll have to look at much more fundamental aspects of how and when you use ice.

“The majority of the conversation around ice is not science-based,” Liu says. “It’s more about what looks cool. If all you want to do is cool your drink down without diluting it, the most obvious way is to stick it in the freezer.” 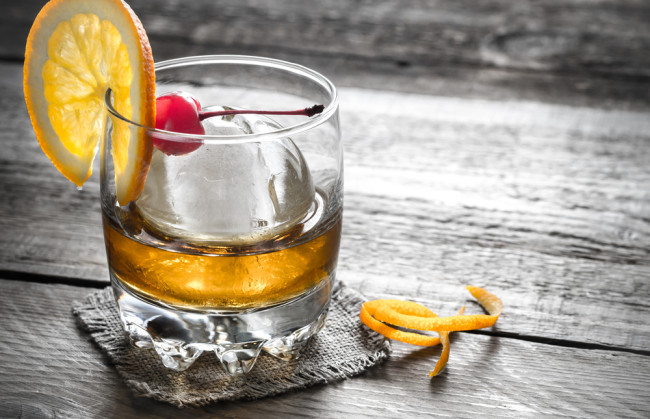 That ice sphere looks cool, but will the water taste good when it melts? (Credit: Alexander Prokopenko/Shutterstock)

Instead, Liu says, you should focus on the quality of your ice. Water is the most basic component of whatever booze you’re drinking. That’s why craft alcohol makers often play up their water choice.

So when it comes to cocktails or fine spirits on the rocks, the quality of the water you have at home suddenly becomes important. To find out if your ice tastes good, try simply melting a cube in a glass and tasting it.

Tip 3: You Can Learn to Control Temperature

Once you know your ice isn’t taking away from your cocktail, you can focus on more advanced methods of employing it. Ice is one of the most powerful ways to bring out subtle flavors by playing with temperature, dilution and mouth feel. Shaking versus stirring ice into a cocktail, for instance, actually does leave James Bond with a fundamentally different drink.

The booze we drink is made with ethanol, the same kind of stuff we put in our gas tanks. And it has a significantly lower freezing point than water. The ice in your freezer is also typically much colder than freezing temperature. That means you can stir in ice and bring drinks down to below 32 degrees Fahrenheit without creating a slushy. As you supercool your beverage, less alcohol will evaporate from it, making it smell — and taste — less boozy. In fact, the colder something is, the less you perceive the taste in general. For example, your martini is mostly booze, but because it’s typically served at more than a dozen degrees below freezing, it doesn’t taste like sipping a bottle of room-temperature vodka.

Shaking ice into a drink instead of stirring it also adds air bubbles, which changes the mouthfeel while also dramatically lowering the temperature. If you’re dealing with a subtle alcohol flavor, like gin, you could lose many of the drink’s pleasing notes. Meanwhile, all that shaking will also melt more of the ice, diluting the drink more than stirring would.

But dilution isn’t always a bad thing. Too little dilution and you’ll also lose the aromas amid the strength of the booze. Too much and you’ll have a weak drink. In both cases, how you use your ice makes all the difference. Mastering this balance between temperature and dilution is key to creating bar-level home cocktails. 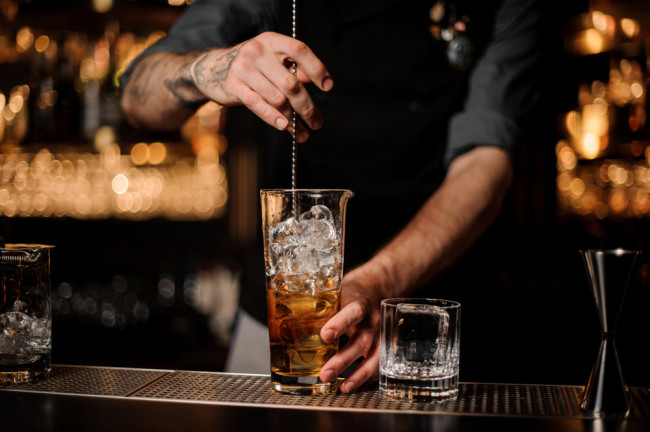 It can take years to master the mixology of shaking and stirring ice into your drinks. But Liu’s top advice about ice should be simple enough for anyone to follow for an immediate cocktail upgrade: Always add ice into the glass last.

“You have to put the ice in last because as soon as you put it in, it’s going to start melting,” he says. “You’ll have a totally different drink depending on how long it takes you to make it.”

For example, Liu recommends building an old-fashioned at room temperature, then adding ice and letting whoever’s drinking it do the stirring as they sip.

Beyond booze, ice and water, citrus is one of the most common cocktail ingredients. Citrus is full of acids that bring powerful aromas and excite the senses, all while serving as a key counterweight to other strong flavors in a cocktail. “Citrus is just as important for adding acid to a drink as it is for adding aromatics,” Liu says. “Ultimately, it adds balance.”

That’s also why it’s important to use fresh ingredients. As citrus juice ages, it oxidizes and loses flavor. That robs the drink of its balance. So forget that little yellow bottle of lemon juice that’s been sitting in your fridge for the past six months. You’ll want to start with the real thing: fresh fruit.

Liu says this advice is doubly important for sours — a traditional family of cocktails that includes drinks like margaritas, daiquiris, whiskey sours and pisco sours. Lemon and lime juice are major ingredients. “I’m a big fan of using science for shortcuts whenever possible,” he says. “If there was a way to substitute for fresh fruit juice, I would use it.” 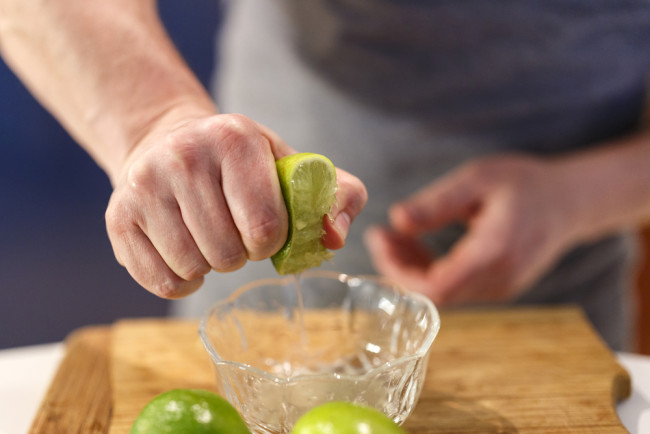 Another thing to consider is slightly aging some of your fruit juices. Yes, juice kept in a plastic bottle for months will lose its flavor, but certain juices like lemon and lime will gain complexity when left to sit about four to 10 hours after squeezing, and grapefruit can continue getting more bitter over several days, Liu says. However, he claims fresh-squeezed orange juice is always best poured straight into the glass.

Another interesting way to experiment with citrus is by freezing fruit slices and adding them to your cocktails. It adds flavor and lowers the temperature without diluting the drink as much as ice.

Tip 7: Use Bitters to Bring Balance

Bitters have been around for centuries. Their original use was medicinal. Healers prescribed them to treat stomach problems, sea sickness and more. But once bartenders discovered the stuff, we entered a new era of cocktail making.

Bitters are liquors flavored with a combination of herbs and other plants — sometimes even tree bark and roots. Increasingly, craft spirit companies have been adding new and experimental flavors to their bitters.

The liquor imparts acidity, but as the name implies, it also brings some bitterness. Depending on your cocktail recipe, bitters might be employed to deliver potent aromas and flavors, or to balance out some other aspect of the drink. A drink could be sickly sweet without it. In this case, just a dash can make the difference between not quite right and a perfect cocktail.

Carbonation isn’t necessarily a sign of sophistication in mixed drinks, but let’s face it, the closest many of us have gotten to mixology at home is combining gin and tonic. If you want to take your at-home bartending to the next level, you should know that adding a carbonated beverage doesn’t just water down your booze. It can also be a way of adding acidity, mouthfeel and a powerful nose — as the bubbles force the scent out — to otherwise simple cocktails.

Carbonated water is simply H2O that’s been force-pressurized so carbon dioxide dissolves into it. When you mix a carbonated beverage into your drink, that pressure is released, and the carbon dioxide starts coming out of solution. Tonic water or cola, for example, can add a bit of a bite, which is why they balance well against certain kinds of alcohol, like rum or gin. But as the carbonated beverage releases its air bubbles, they also create a pleasing tingle on the tongue. And when those same bubbles erupt at the top of your glass, they release the aromas from your beverage into the air, pushing them up toward your nose. There, they can actually alter how a drink tastes as the olfactory receptors in your nose work together with your taste buds.

So, if you’re going to make a vodka and soda, consider using something other than your favorite flavor of LaCroix. Try experimenting with different brands and kinds of soda water. Each has subtle differences in its flavor and level of carbonation. And know that any added flavors could potentially overwhelm the subtle characteristics of that fine bottle of craft gin you bought.

If you wanted to perfect your sourdough bread recipe, you probably wouldn’t combine the ingredients in a different order every time you baked it. That would obviously make it hard to master the process, or isolate and improve on areas where you made mistakes.

It’s the same way with cocktails. In the true spirit of a science experiment, Liu says you’ll never make a perfect cocktail without first following a strict and repeatable process. 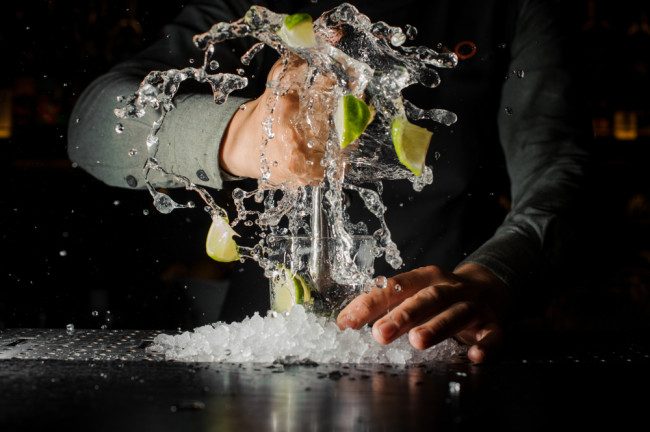 He says that experienced bartenders start by adding the cheapest ingredients first — other than ice, which goes in last. That way, if they mess up, it’s not a big deal to toss the drink and start over.

We’ve all done it. You get overzealous pouring your bubbly or beer into a glass and the next thing you know, half of the glass is full of foam. That overflowing head isn’t the only change you’ve inflicted on your drink. As you dump booze, it’s bubbling away its aromas.

“If you’ve poured beer and it starts getting foamy, the answer is not to keep pouring more beer into it,” he says. “If you pour foamy beer into foamy beer, it’ll just be more foamy. Once you’ve screwed it up, it’s screwed up.”

Your bartender should know that, too. A bartender who takes their work seriously will stop the pour and address the issue instead of dumping foam on foam.

That’s not to say you should be a jerk to your bartender. Skilled bartenders at high-end establishments can make good money. But Liu points out that the average bartender in America earns just $19,000 a year, so your foamy beer is probably the least of their concerns. If you truly prize the quality of your drink, it makes sense to frequent bars that value their bartenders — especially as many establishments struggle to survive the pandemic. It takes years to master their skillsets, and the drinking public needs a good cocktail now more than ever.

So if you do decide it’s safe to hit your favorite bar’s patio, or pick up some to-go cocktails on Friday night, don’t forget to tip your bartenders.