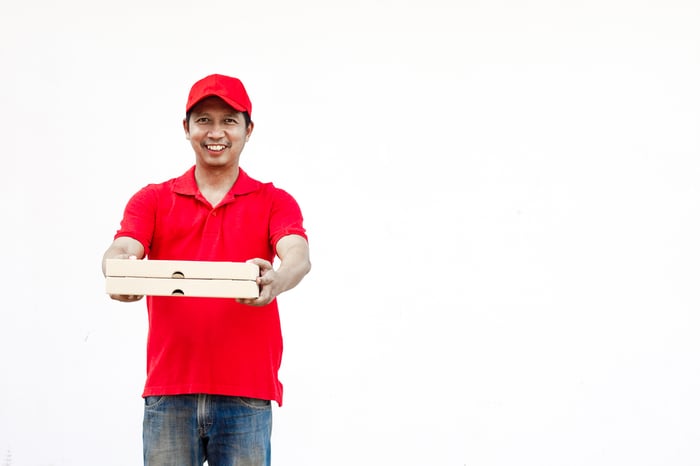 Domino’s provides inexpensive offerings, which go beyond pizza to include items such as chicken, sandwiches, pasta, and desserts. It also constantly tinkers and updates its menu. For instance, it launched a chicken taco pizza and cheeseburger pizza during the summer. As the results show, its prices and products are resonating with customers.

Some investors were disappointed that the sales weren’t as robust as those of Papa John’s International (NASDAQ:PZZA). But it’s hard to make a judgment about one quarter, and besides, Domino’s showed excellent sales growth over an extended period.

Investors also didn’t like the elevated expenses during the quarter, caused primarily by higher wages and sick pay for Domino’s store employees due to the pandemic.

This doesn’t concern me, though. For starters, despite increased expenses, Domino’s earnings per share jumped up by 21.5% compared to the year-ago period to $2.49.

True, this was below the $2.79 consensus estimate, but how can you feel disappointed about a greater than 20% growth in earnings? As long as consumers keep clamoring for Domino’s products, and it continues its string of comps increases, there’s nothing to suggest otherwise — it will leverage these expenses. In other words, sales growth will outpace the cost increases in the future. With strong demand for its products, Domino’s could also pass the higher expenses along via price hikes.

Perhaps the biggest problem in the minds of investors was the stock price’s big run-up this year, which created high growth expectations. Before the price drop after the earnings release, Domino’s shares were up nearly 50% this year.

The stock market can get fickle. But for long-term investors, you shouldn’t get too caught up in the short-term price movements. Domino’s is an excellent business that has produced steadily higher sales and earnings. As the pandemic and subsequent economic fallout have shown, people will keep ordering pizza and other food from Domino’s even when times get tough.

With the stock’s sharp sell-off, now is an opportune time to pick up some shares. Domino’s sharp execution means the opportunity to purchase the stock at this price is not likely to last long.