Fortnite creator Epic Games has taken another step in its ongoing battle with Apple.

On Friday, Epic Games doubled down on its request for a preliminary injunction that would require Apple to put its beloved video game back in the App Store. In a California court filing, the gaming company refuted a number of claims made by Apple, including one that suggested gamer interest in Fortnite was fleeting.

Apple removed the Fortnite app in August after the gaming company violated Apple’s rules by introducing a direct payment option into the game without Apple’s approval. That payment system would have competed with Apple’s in-app purchase system, which the iPhone giant requires all apps to use.

Typically, when players on iOS devices make in-app purchases, Apple gets a 30% cut of those sales. Fortnite’s direct payment functionality undermined that structure.

In a Sept. 4 court filing, Epic Games argued that it is “likely to suffer irreparable harm” if the app isn’t allowed back in the App Store. It also called Apple a “monopolist.”

Apple recently responded in an opposing court document, claiming that “Epic started a fire, and poured gasoline on it, and now asks this Court for emergency assistance in putting it out.” Apple also cited Google Trends data, saying that searches for Fortnite are down nearly 70% over last year.

Apple blamed Epic Games for the app store stalemate, saying the gaming company is “holding its own customers hostage to gain leverage in a business dispute.” 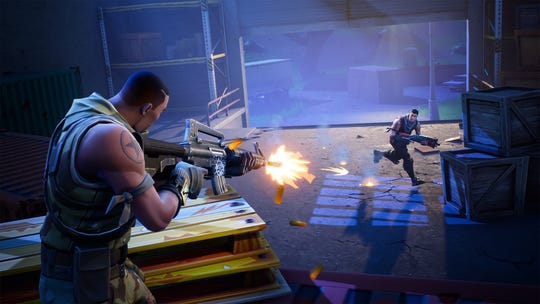 A full hearing on the matter is scheduled for Sept. 28. Epic Games wants Fornite back on the App Store before then.

“Epic seeks one thing only: to offer consumers an alternative payment processing service that allows consumer choice and lower prices while this litigation proceeds without retaliation,” the gaming company said.