Executives are being urged to review the technology supporting their workplace pension scheme, amid concerns that providers’ ageing legacy systems are expensive, delivering members a poor user experience and making scaling up tricky.

The limitations of incumbent systems have become a discussion point as finance directors and pension scheme managers future-proof their businesses. It comes against a backdrop of emerging risks, such as vast regulatory changes and an increasingly difficult economic climate.

Smart Pension, a global platform provider with its own UK master trust, is urging those responsible for company pensions to review their incumbent provider’s technology and ask whether it offers the service, efficiency and resilience their scheme requires.

“Most pension administration systems were written at least 15 years ago, in programming languages that people don’t use anymore. It is expensive, unreliable and isn’t scalable,” says Will Wynne, co-founder and group managing director of Smart. “In today’s world, there shouldn’t be a need for people to push pieces of paper around or do manual reconciliations; members are not receiving value for money.”

Wynne’s assessment of the industry has captured the attention of big names around the world, with his company attracting nearly a hundred million pounds in investment from companies who agree the global pensions administration landscape is ripe for change.

To date, the company has seen investment from financial behemoths, such as J.P. Morgan, Legal & General, Natixis and Barclays, in its various funding rounds.

The company, founded in 2014, has been growing rapidly with international clients signing up to the Smart platform, such as Bank of Ireland’s New Ireland Assurance and the Dubai International Financial Centre. The company is currently on course to have ten million members on its platform by the end of 2022. 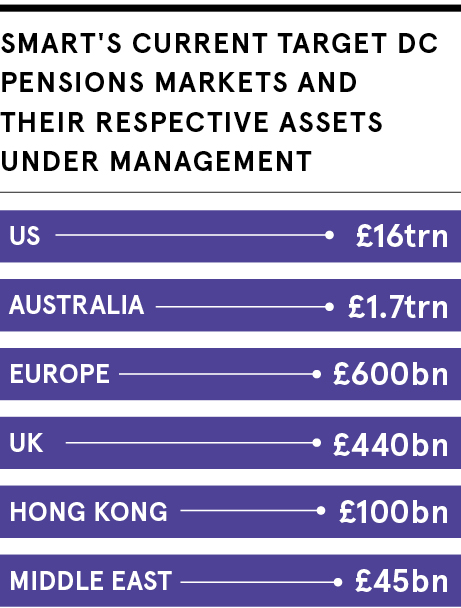 The appeal is multi-faceted. It offers seamless integration with payroll software, a mobile app and website for scheme members, a corporate website for the scheme manager and the ability to power the pensions of the future in the UK and abroad. The core focus is retirement technology, working with the best pension providers to turbo-charge their proposition.

Incredibly, many companies are using several, separate platforms to administer their pension for employees around the world, because the process cannot be managed by one central point due to the limitations of legacy systems.

Similarly, member administration can be slow, often requiring manual interventions, which means companies have to pay for teams to handle these requests.

Wynne explains that the Smart Pension platform allows scheme managers to be much nimbler in handling administration and meeting compliance requirements, and enabling them to embrace more sophisticated investment strategies.

“Everything manual has been removed,” he says. “In a traditional system, huge intervention is required. With Smart Pension a team of fifty can become a team of five. It takes away a substantial chunk of costs of managing a pension administration platform.”

In the world’s largest defined contribution pension markets of the UK, United States and Australia, there has been substantial regulatory change in recent years. Much more is anticipated. Increasingly, companies are recognising they need to move away from systems which make regulatory reporting a difficult process. Ultimately, it is another corporate risk that can be eliminated.

“There is huge regulatory change happening globally in retirement right now,” says Wynne. “In the United Arab Emirates, they have pushed forward with reforms in Dubai, while in the UK, the Financial Conduct Authority is focused on its Retirement Outcomes Review.”

While global regulators have afforded some extra time for businesses to prepare for the incoming rule changes due to the coronavirus pandemic, the regulatory burden is increasing. In the years ahead, companies will need modern systems which can handle even greater volumes of front and back-office data.

“We have taken every process required by regulators and made it as efficient as possible,” says Wynne. “What used to take several weeks can now be done in minutes online. We have built massive scale in the background so our platform can handle tens of millions of members, billions of transactions, and can reconcile across multiple territories.”

Smart Pension’s co-founder believes companies are now waking up to the dangers lurking in their providers’ elderly technology. He hopes that by encouraging them to explore the limitations of their existing systems, they may become aware of the risks to which their business is exposed.