MLCCs are placed throughout circuit boards in smartphones. About 800 MLCCs are used in a high-grade phone; the number is 20% higher in a 5G model.

5G smartphones require more parts with exacting specifications than do 4G models so as to handle larger throughput at higher speeds. Because space is at a premium, 5G devices rely heavily on technology that can shrink parts while enhancing their capabilities.

The component that takes up the most space is the battery. 5G handsets consume more power because they process more data, faster. This calls for smaller batteries with greater capacity.

In addition to traditional customers like Apple and Samsung Electronics, ATL supplies a growing number of midsize manufacturers in China and elsewhere, according to Mitsutaka Fujita, a researcher at Tokyo-based Techno Systems Research. ATL’s market share will continue to grow this year, he predicts.

Smartphones are also equipped with filters to pick up specific frequencies by blocking out others. As the number of bands that phones must handle increases, so does the need for filters. 5G phones process not just such high-frequency ranges as sub-6GHz spectrum and the millimeter band (24.25 GHz to 52.6 GHz), but also those used by older handsets.

One widely used filter is called a surface acoustic wave filter. A typical smartphone is equipped with 50 or so of these, but that number is expected to rise to as many as 70 in 5G phones.

Because the sub-6GHz and millimeter bands are higher frequencies than those used for previous generations of wireless technology, conventional filtering technology may not be precise enough. To tackle this challenge, Murata in October bought a stake in Resonant, a U.S. company that designs radio frequency filters. Murata plans to use technology developed jointly with Resonant to create new products, with volume production to start in 2022.

5G technology also demands smaller connectors to link printed circuit boards. These must operate with extremely low noise so as not to interfere with high-speed data communications.

Japan Aviation Electronics Industry, an NEC subsidiary, is working on new technologies to make noise-free connectors. The company is taking advantage of technology it has developed for aerospace applications to gain a foothold in the market for 5G smartphone components. 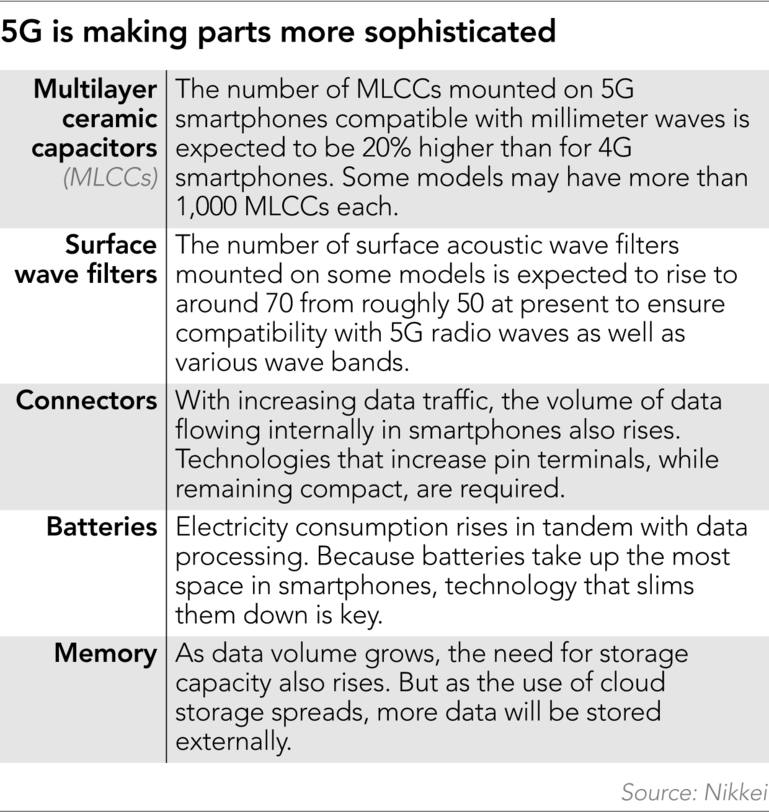 “Chinese and South Korean competitors will narrow the gap with Japanese players in the next 10 years, but they will not be able to catch up easily as Japanese makers will also evolve their technologies,” said Minamikawa.

But despite these advantages, Japanese manufacturers do not dominate the overall market for smartphone parts. Samsung and other South Korean companies, for example, control 90% of the global market for organic light-emitting diode displays, which are used in a growing number of 5G phones because they are thinner and lighter than LCDs.

While China’s BOE Technology Group is trying to grab share from South Korean competitors, there are few notable Japanese players in this area.

A number of U.S. companies, meanwhile, are leaders in smartphone chip technology. Qualcomm plans to launch a 5G-compatible processor in 2021 that experts say will bring the faster networking standard to low-priced phones. It will be the latest chipset offering from Qualcomm, which has steadily expanded its portfolio of 5G-compatible products.

Kioxia is the only Japanese maker of memory chips still standing. The company is gearing up for mass production of next-generation memory to cash in on expected growth in demand for large-capacity products.

As the number of data centers and other facilities increases, “demand for memory will keep growing in the medium to long term,” according to a company official.

The battle for technological supremacy between the U.S. and China could potentially benefit Japanese manufacturers of 5G components. “If the U.S. and China remain locked in a fierce fight for hegemony, Chinese makers’ rapid climb up the technology league table is bound to slow down,” said Minamikawa.