“The show is the best way to present the collection,” Pavlovsky insists. The company was forced to cancel its Cruise show in Capri in May, and instead debuted the collection online via video in June. Although it reached an audience of 264m, reviews were mixed and “the impact [was] not the same for customers”, he says.

2019 was a banner year for the privately held Chanel, a 110-year-old house owned by the reclusive Wertheimer brothers, Alain and Gérard. Sales reached $12.3bn, up 13 per cent from 2018, solidifying its status as the second-largest luxury brand behind Louis Vuitton and ahead of Gucci. Profits climbed 16.6 per cent to $3.5bn despite the passing of longtime artistic director Karl Lagerfeld.

And then coronavirus arrived. At one point, around late March or early April, 90 per cent of Chanel’s 205 boutiques and factories were closed. Today, about five of its locations, primarily in airports, remain shut.

While Pavlovsky is upbeat about the company’s performance this year, he says he doesn’t know when sales will return to 2019 levels. “It is a lot about when people will be able to travel again,” he says.

E-commerce is not the boutique. We want to always keep in mind what is best for our customers. Experience is part of that

Asia is rebounding quickly, he adds. “In some countries — China, Taiwan, Korea — we are doing much better than 2019.”

Despite temporary store closures, the lockdowns have not changed Pavlovsky’s famously reticent views on online retail. Chanel did not begin selling online until 2015, and even now sells only beauty, fragrance and eyewear on Chanel.com.

“E-commerce is not to replace the boutique,” he says. “We want to continue to lead the luxury market, and to that end we have to be careful to always keep in mind what is best for our customers. Experience is part of that.”

Hence Tuesday’s show, where the Chanel name formed the backdrop, blown up and illuminated in lightbulbs in a nod to the famous Hollywood landmark.

Chanel has never been particularly shy about using its logos and trademarks, but in a manner similar to Prada they were accentuated to an unusual degree in this collection. The Chanel letters were emblazoned across T-shirts, dresses and jacket sleeves, while interlocking double Cs flashed on earrings, belts and ropes of pearls — most of them waist-up placements that would be readily visible on Zoom.

These were accompanied by 1980s power-dressing jackets with moulded (though not padded) shoulders in black leather and tweed; narrow above-the-knee skirts and Bermuda shorts; and high-waisted, pleated jeans in bleached denim and fluorescent pink. The cuts were occasionally unflattering — not even the models could make an oversized bomber jacket and pedal pushers look good — but a trio of evening dresses were lovely, with their long, spare lines and black feathers.

“I was thinking about actresses at the photocall, on the red carpet, that moment when they’re being called to by the photographers: their faces a little distracted, their attitude a little out of sync with the outfits they’re wearing,” read the show notes by Virginie Viard, who succeeded Lagerfeld as artistic director 18 months ago. “Gabrielle Chanel and Karl Lagerfeld dressed so many actresses in films and in real life. I was thinking about them who make us dream so much.” 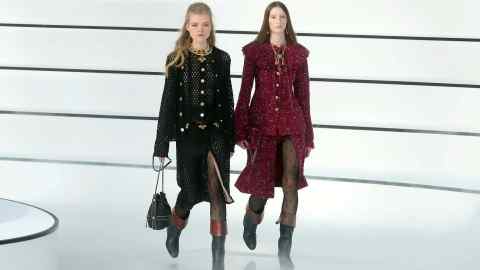 The collection might not be everyone’s cup of tea, but Viard’s designs are selling. The house’s ready-to-wear sales were up 28 per cent last year, and Pavlovsky says they are continuing to perform, particularly in Asia.

“She’s a woman designing for women,” he says. “She has a very feminine take that we need.”