Democratic presidential nominee Joe Biden laid out his vision for manufacturing during a Monday stop in Toledo, vowing to emphasize union labor and make it easier for consumers to “move to the vehicles of the future.”

Biden spoke for about 25 minutes at a drive-in rally outside a United Auto Workers union hall in the Ohio city that borders Michigan 22 days before the Nov. 3 election. The former vice president touted his plans to create a network of 500,000 charging stations and offer rebates for those looking to swap out older vehicles for newer, more fuel-efficient ones — his version of the “cash for clunkers” program from President Barack Obama’s administration.

“We’re going to make it easier for American consumers to move to the vehicles of the future,” Biden said at one point.

“We’re going to move in a direction that technology is taking us and making sure the UAW leads the way in how we do it,” he added.

The UAW Local 14 where Biden spoke represents workers at the General Motors Co.’s Toledo powertrain plant. Supporters pulled into the lot in their vehicles to listen to the speech, using their horns to applaud.

The former vice president slammed President Donald Trump for mishandling the COVID-19 pandemic and failing to boost manufacturing jobs. Ohio, a state that Trump won in 2016 by 8 percentage points, has seen an increasing number of campaign visits in recent weeks.

Trump held a rally just outside of Toledo at the airport in Swanton, Ohio, on Sept. 21. 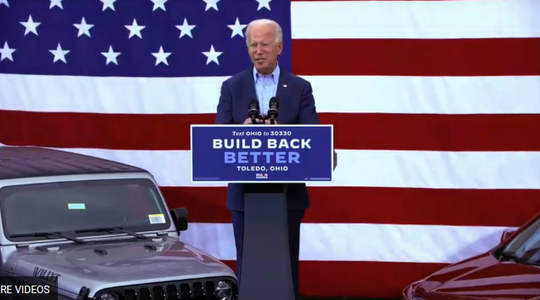 On Monday, Biden referenced General Motors’ decision to close its Lordstown assembly plant in northeast Ohio in 2019. He also mentioned Trump calling for a boycott of Ohio-based Goodyear Tire & Rubber Co. According to Bloomberg, the president’s comments came after an image appeared to show a training session labeling Trump campaign gear “unacceptable” for the workplace.

Trump “betrayed union workers” at Goodyear because of a “personal grudge,” Biden said.

He also criticized the president for failing to bring Democrats and Republicans together to work out a stimulus program this fall to boost the economy during the COVID-19 pandemic. The nation’s seasonally adjusted unemployment rate stood at about 8% in September, according to the Bureau of Labor Statistics.

“He turned his back on you. I promise you I will never do that,” Biden said.

“It’s all going to be done by certified union labor,” Biden said.

The former vice president also emphasized his involvement in the 2009 auto industry rescue during the Great Recession. Obama forced GM and Chrysler into bankruptcy and loaned them and their lending arms about $55 billion after President George W. Bush loaned them $25 billion near the end of 2008.

The federal government “bet” on auto workers and it “paid off,” Biden said.

Auto sales recovered during the Obama administration along with the economy that grew at a 2% rate — which Trump criticized as too slow during his 2016 campaign.

When Trump took office, auto sales already had grown for six consecutive years under Obama. Sales expanded for another year in 2017 to 17.55 million units before gradually declining in 2018 and 2019. But sales have remained above 17 million units for five consecutive years, including the first three years of the Trump presidency — a historic industry achievement.

Toledo is also a 30-minute drive Monroe, the county seat of Monroe County in Michigan. In 2012, that county voted for President Barack Obama, a Democrat who won there by 717 votes over Republican Mitt Romney. Four years later, the county flipped to Trump, who won it by 16,398 votes.

The four-year swing was more than the 10,704 votes by which Trump won the entire state, his smallest margin of victory nationally.

Biden hit on a number of similar points Monday that he emphasized during a Sept. 9 speech outside a Warren United Auto Workers hall.

One of Biden’s new topics, however, was Trump’s handling of his own COVID-19 diagnosis. The president revealed he had tested positive for the virus on Oct. 2.

“His reckless personal conduct since his diagnosis has been unconscionable,” Biden said of Trump. “The longer Donald Trump is president, the more reckless he seems to get.”

The Republican president is set to do a campaign rally Monday evening in Florida after Trump said Sunday he he no longer has COVID-19, while the White House refused to say whether he has tested negative for the virus.