NVIDIA (NASDAQ: NVDA) shares have more than doubled so far in 2020 thanks to strong momentum in the graphics specialist’s video gaming and data center businesses, but Micron Technology (NASDAQ: MU) has been witnessing tough times, as there seems to be uncertainty about the memory industry’s dynamics.

Micron’s lukewarm guidance for the forthcoming quarters has spooked investors of late. NVIDIA, on the other hand, is promising better times ahead on the back of new products and lucrative opportunities in fast-growing markets. However, not all investors will like NVIDIA stock right now because of its rich valuation. Micron’s valuation is reasonable in comparison, but does that make it a better bet over NVIDIA? 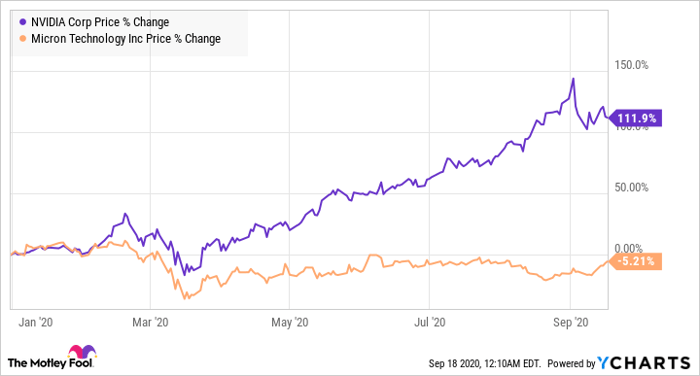 Micron’s weakness may not last long

Micron Technology may have given investors a scare in recent weeks, but the memory industry’s dynamics seem to indicate its fortunes could change. Goldman Sachs recently upgraded Micron shares, as it expects memory prices to strengthen. The investment bank also says that the near-term weakness in memory prices won’t last for long.

The good thing for Micron is that spot memory prices have started improving. More importantly, the memory industry can count on a few catalysts that are likely to result in a stronger pricing environment going forward. The rollout of new graphics cards by NVIDIA and Advanced Micro Devices, as well as the launch of gaming consoles by Sony and Microsoft, are expected to result in stronger demand for graphics DRAM (dynamic random access memory).

On the other hand, demand for mobile DRAM could improve as the smartphone industry and consumers transition toward 5G devices. The mobile business accounts for a nice chunk of Micron’s total revenue, and it has been growing at an impressive pace. That tailwind is unlikely to die out soon, as 5G smartphone shipments are anticipated to take off in the coming year.

Moreover, investments in memory-making capacity are expected to slow down in the second half of 2020 as industry participants scale down spending to match supply with weakening demand. Cloud companies ramped up memory demand in the first half of the year in the wake of the novel coronavirus-related lockdowns, which created more pressure on data centers. However, data center operators are reportedly dialing down their investments now, causing short-term weakness in memory prices. But once the new catalysts kick in and supply curtailments happen, memory prices can be expected to firm up once again and help Micron get better.

Industry watchers predict that the memory market should start improving from the first quarter of 2021 as the demand-supply dynamics turn favorable. Datacenter demand could pick up once again as inventory levels start normalizing, complementing the other tailwinds listed above. Micron Technology’s financials rely heavily on memory prices, which is why an improvement in the same should bode well for the company’s future.

NVIDIA has been flying high as two of its biggest businesses have gathered impressive momentum this year, and the company is leaving no stone unturned to sustain its terrific run.

First, NVIDIA launched a new generation of graphics cards at aggressive price points that could compel its huge installed base of users to upgrade. As video gaming was NVIDIA’s second-largest business last quarter with nearly 43% of its total revenue, the company stands to win big from this transition toward a new GPU (graphics processing unit) generation.

Similarly, the company’s data center business is riding high on account of an increase in demand for GPU accelerators to tackle artificial intelligence workloads. And now NVIDIA is looking to take another step to boost its dominance in the semiconductor space with the $40 billion purchase of chip designer Arm Holdings.

The deal is pending regulatory approval now, but it could be a big deal for NVIDIA, as Arm’s technology powers smartphones made by the likes of Samsung and Apple. NVIDIA CEO Jensen Huang plans to use Arm’s technology to target a variety of markets ranging from autonomous cars to personal computers, the Internet of Things (IoT), robotics, and others.

Artificial intelligence (AI) seems to be one of the key reasons why NVIDIA may have spent so handsomely on Arm. “In the years ahead, trillions of computers running AI will create a new internet-of-things that is thousands of times larger than today’s internet-of-people,” explained NVIDIA’s Huang. “Our combination will create a company fabulously positioned for the age of AI.”

Allied Market Research estimates that the market for AI chips could be worth $91 billion by 2025, compared to $6.6 billion in 2018. NVIDIA’s acquisition of Arm Holdings could play a big role in helping it tap this fast-growing market, as the latter has already been working on chip designs for AI-enabled sensors that can be deployed in a variety of applications ranging from the automotive industry to toys.

As such, it wouldn’t be surprising if AI turns out to be a big play for NVIDIA in the future after gaming and data centers, as the tech giant is now looking to bring AI mainstream with its latest acquisition.

NVIDIA is not a stock for value investors. The stock trades at a price-to-earnings (P/E) ratio of nearly 95, which is more than double its five-year average of 44. The forward earnings multiple stands at almost 59.

NVIDIA’s rich valuation seems justified considering its terrific pace of growth. But those with a low appetite for risk may be apprehensive about buying it, as the company will have to consistently hit Wall Street’s high growth expectations. Failure to do so could lead to a sharp price pullback, which is why Micron may be a better fit for investors looking for both value and growth.

Micron’s trailing P/E ratio of 24.5 is substantially lower than NVIDIA’s. Of course, its growth isn’t as great as NVIDIA’s, but the memory specialist is showing signs of a turnaround. The improvements in the memory industry’s dynamics, spurred by increased demand and tighter supply, could help Micron deliver upside in the future, which is why value-oriented investors should keep a close watch on this stock.

But those who have a higher appetite for risk should not count NVIDIA out — this growth stock could scale greater heights if it can keep pushing the envelope as it has done so far.

10 stocks we like better than NVIDIA
When investing geniuses David and Tom Gardner have a stock tip, it can pay to listen. After all, the newsletter they have run for over a decade, Motley Fool Stock Advisor, has tripled the market.*

David and Tom just revealed what they believe are the ten best stocks for investors to buy right now… and NVIDIA wasn’t one of them! That’s right — they think these 10 stocks are even better buys.