In a previous article we timidly proposed that the bottom for Micron (MU) was close at hand if not already here. Since then, there have been new developments that reinforce that theory. Incidentally, the stock has shown renewed strength recently and may have even gotten ahead of itself.

The previous article was published at a time when everything was going wrong for Micron’s stock. Shortly before then, Deutsche bank analyst Sidney Ho had downgraded Micron citing inventory buildup in data centers and weakening demand elsewhere. The next day, at a KeyBanc event, Micron’s CFO disclosed that Micron may miss the revenue target at the next earnings report. Huawei ban was announced a short time later and during a subsequent BMO conference it was revealed that the ban could affect Micron’s top-line by almost 10%. If the foregoing trifecta was not enough, there were price target cuts by other analysts as well as news of expected DRAM demand softness and falling ASP’s in fiscal Q3 by DRAMeXchange.

Amidst all the foregoing developments there was an interesting phenomenon: The stock price did not react as strongly to the negative news as one would expect. Those who have traded Micron in the past are aware of how susceptible it can be to sharp drops following negative news.

As it turns out, Micron stock’s reaction to news is influenced by its cycles. During the upcycle, positive news has an outsized influence. During the downcycle, negative news affects the stock more.

This fact is illustrated in the chart below. 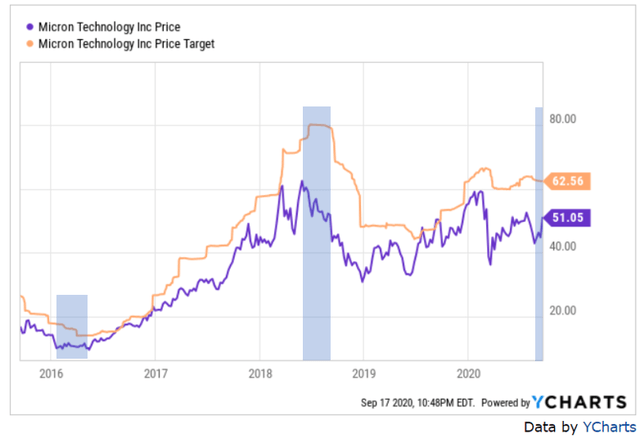 The adage “don’t fight the tape” is especially relevant when the price moves contrary to the news and it is one more indication that the bottom is here.

The Pendulum Has Swung the Other Way

Micron’s stock has rallied in recent days as illustrated in the chart below:

We believe the reason is largely due to the cycle effect. As mentioned previously during the upcycle the stock tends to move up. Positive news lead to exaggerated moves. An upgrade by Goldman Sachs moved the stock up by 6% in a single day.

There are other catalysts helping Micron now.

There has been news of Micron’s partnership with NVidia (NVDA) developing the next generation graphics memory. The details are explained eloquently in Electric Phred’s new article.

There also appears to be a shift away from momentum and towards value stocks.

The three charts below compare Micron and Intel’s (INTC) performance versus Nvidia and AMD (AMD) for five days, one month and 3 months. NASDAQ is also included as a point of reference.

How long will this rotation last is anyone’s guess. If you ask Steve Grasso, it has just begun. He is more into non-tech cyclicals, but the idea is the same. Here is another article about rotation in the context of the bigger picture.

There appears to be an inordinate amount of bullishness surrounding Micron’s stock. There is good reason for it. Given the long-term prospects, Micron is an excellent value.

But there are risks lurking around the corner. The macro environment is at the top of the list. There are technical indications that the market is over-extended and could be rolling over. Add to that the worsening trade-war, the impasse over additional economic stimulus and the election itself and the result is a powder keg that can be ignited at any moment.

The rotation may also end abruptly at any moment. Any news that reignites the market is likely to spur on a stampede of investors back to the momentum stocks.

Forgotten are all the short-term headwinds that caused Micron to underperform before the recent rally. They are all still very much relevant and renewed focus on any one of them can set off a temporary sell-off.

In its customary ways, the market seems to have swung too far the other way and appears to be disregarding all risks.

These are some of the reasons we are currently short Micron. It is not a bet against Micron but rather a short-term hedge against some long positions in the tech sector. It is quite possible that we will exit the short position before this article is published. Officially we are very bullish on Micron and believe the stock will see considerably higher prices within the next year. The recent highs of mid-60’s will most likely be retested.

Because of the macro environment, we are currently not focusing on long-term investment and prefer to trade the ebbs and flows. If we were a long-term investor in Micron, we would consider taking some profit or hedging against possible selloffs.

Disclosure: I am/we are short MU. I wrote this article myself, and it expresses my own opinions. I am not receiving compensation for it (other than from Seeking Alpha). I have no business relationship with any company whose stock is mentioned in this article.