Nasa has captured an exploding supernova on camera.

The supernova called SN 2018gv is located around 70 million light-years away from Earth, in the spiral galaxy NGC 2525.

A supernova is a pretty spectacular cosmic event, which happens when a star reaches the end of its life cycle and collapses in on itself.

This causes an incredibly powerful explosion which can send shockwaves across the galaxy, and can even create black holes.

According to Nasa, supernova SN 2018gv unleashed a surge of energy that was five billion suns brighter than our Sun. That’s pretty bright!

The scientists were able to record the exploding star using the Hubble Space Telescope. 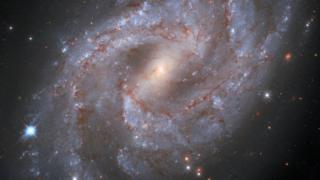 Nasa have been tracking the supernova since February 2018, to help them monitor the expansion rate of the universe.

The scientists used something called time-lapse photography to capture the explosion, where lots of pictures were taken over a year, and then turned into a video.

In the time-lapse, scientists could see the star shining brightly near the edge of the galaxy, before it exploded, becoming a supernova, then fading from sight.

“No Earthly fireworks display can compete with this supernova, captured in its fading glory by the Hubble Space Telescope,” said Adam Riess of the Space Telescope Science Institute (STScI) and Johns Hopkins University in a statement.