Approval ratings of political leaders surged in the early days of the COVID-19 pandemic, according to a new study published in the Proceedings of the National Academy of Sciences.

In the days and weeks with high numbers of new COVID-19 cases there were also large boosts to leader approval. These results support a “rally ’round the flag” phenomenon in which citizens rally around their leaders during times of crisis and may have voting implications.

Data analyzed by the University of North Carolina at Chapel Hill and the National University of Singapore reveal world leaders, on average, experienced a 14-point boost in approval.

Citizens tend to support their leaders in times of national crisis, such as war or terrorist attack, but the new study is the first to identify a rally effect during a health crisis — one that’s been deadly and destructive across the globe.

The idea for the

What impact has the pandemic-induced remote spring had on teaching and learning technology usage trends in U.S. higher education, and what do 2020 tech patterns suggest about the student experience of the future? Richard Garrett, chief research officer at higher education research firm Eduventures, will share insights from the fifth Changing Landscape of Online Education (CHLOE) report, based on a unique survey of online learning leaders undertaken by Eduventures and Quality Matters. The presentation will consider which solutions are most used, the level of standardization within institutions, the extent of cloud adoption and more. We’ll also examine long-term technology adoption trends based on data from Eduventures partner ListEDTech. 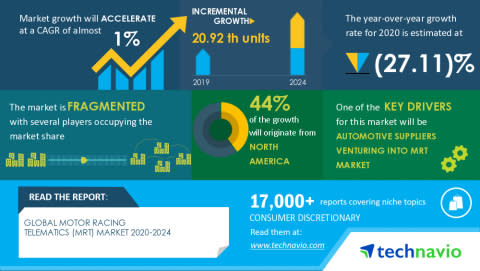 The motor racing telematics market is expected to grow by 20.92 thousand units during 2020-2024, expanding at a CAGR of almost 1%. The report also provides the market impact and new opportunities created due to the COVID-19 pandemic. We expect the impact to be significant in the first quarter but gradually lessen in subsequent quarters – with a limited impact on the full-year economic growth.

Designer babies, mutant mozzies and frankenfoods: These are the images that often spring to mind when people think of genome editing.

The practice, which alters an organism’s DNA in ways that could be inherited by subsequent generations, is both more complex and less dramatic than the popular tropes suggest.

However, its implications are so profound that a growing group of experts believe it is too important a matter to be left only to scientists, doctors and politicians.

Writing in the journal Science, 25 leading researchers from across the globe call for the creation of national and global citizens’ assemblies made up of lay-people to be tasked with considering the ethical and social impacts of this emerging science.

The authors come from a broad range of disciplines, including governance, law, bioethics, and genetics.