Imagine a Sim having a better chance of attending the football Premier League than you do. We get into why — owing to coronavirus — CGI fans are a thing of the present and, potentially, the future for sports

‘And the crowd goes wild!’ Well, not really.

Whether you were watching this year’s Coppa Italia or even Major League Baseball, you may have noticed the fans in the stands were unusually animated — pun intended. Yes, 2020 has been the year of CGI fans being the new ticket-holders for sport events you most definitely want to attend in that tight-locked bio-bubble. No more hilarious rival fan fights in the stadium for all the world to see; COVID-19 has cleared out festival venues, stadiums, theatres and more areas where hundreds would have communed to celebrate.

Get down to business

CGI fans are digitally rendered people — yes, like Sims — which fill out a scale of space. Early forms of CGI crowd simulations have been used for crisis training and other crowd-oriented demos by scientific testing facilities with a flow-based approach where the crowd is treated as a whole entity rather than individual CGI characters. This concept of CGI crowds, though, dates back to the 1980s in the form of behavioural animation.

The process sees animators rendering one anthro-figure, then duplicating them with custom-coded variables — hair colour, clothing, and body language being key ones — so that there is variety in a given space. And with the advent of Artificial Intelligence and the development of algorithmic power, technologists are able to separate crowds according to loyalty, letting them ‘cheer’ for their teams or ‘heckle’ for the opposing team, making for a more immersive viewing experience for the fans watching the event via a screen.

Yes, the placement of animators in different industries, as a result, has evolved greatly in the past few months. With few productions happening in offline settings and in real-time, technology has taken the place of simulating a life-like experience. While baseball is not exactly on India’s sports radar as much as another certain bat-and-ball sport, broadcaster Fox Sports was one of the first to scale out CGI fans at Major League Baseball in August; detailed avatars included families, couples, and college-goers with beers and/or snacks in hand. But the faces were not discernible.

Close to the real thing

Production houses and broadcasters are the gateway for making CGI fans a thing of ‘reality’ for the fans at home. Often enhancing sports experiences using Augmented Reality, London-based OZ Sports is one of the champions for tech-powered sports. “The idea is to protect the integrity and experience of the game, by turning the attention away from the empty stadium, and instead replacing it with appealing surroundings to make the game more interesting, and as close to reality as possible. These are times to explore and experiment, to make sports even more appealing and to bring it closer to the latest developments in e-sports,” says CEO Gudjon Gudjonsson. A sample of the stadium ‘filled’ with CGI crowds

Creating virtual crowds requires specific rendering technology, of course. Norway-based Vizrt creates this very tech, making it possible for sports players to look a little less alone in a stadium. They have even held virtual interviews by merging independent streams of individuals located in separate countries to appear to be in the same room having a conversation in a live, one-on-one talk show.

Jonathan Roberts, senior vice president of Vizrt Global Sports and Virtual Advertising, says, “2020 for Vizrt’s Sports solutions has been the year of adaptation. When it became clear to us in February and March that there was a chance that crowds would not be allowed into stadiums in the foreseeable future, we had to see how this would affect our business and whether we could adapt any of our technology to help our customers during this time. When the Virtual Fan overlay solution was suggested and we realised that this would be a huge benefit to the sporting world, we diverted all our resources to making it successful. This crisis has helped us to innovate.” 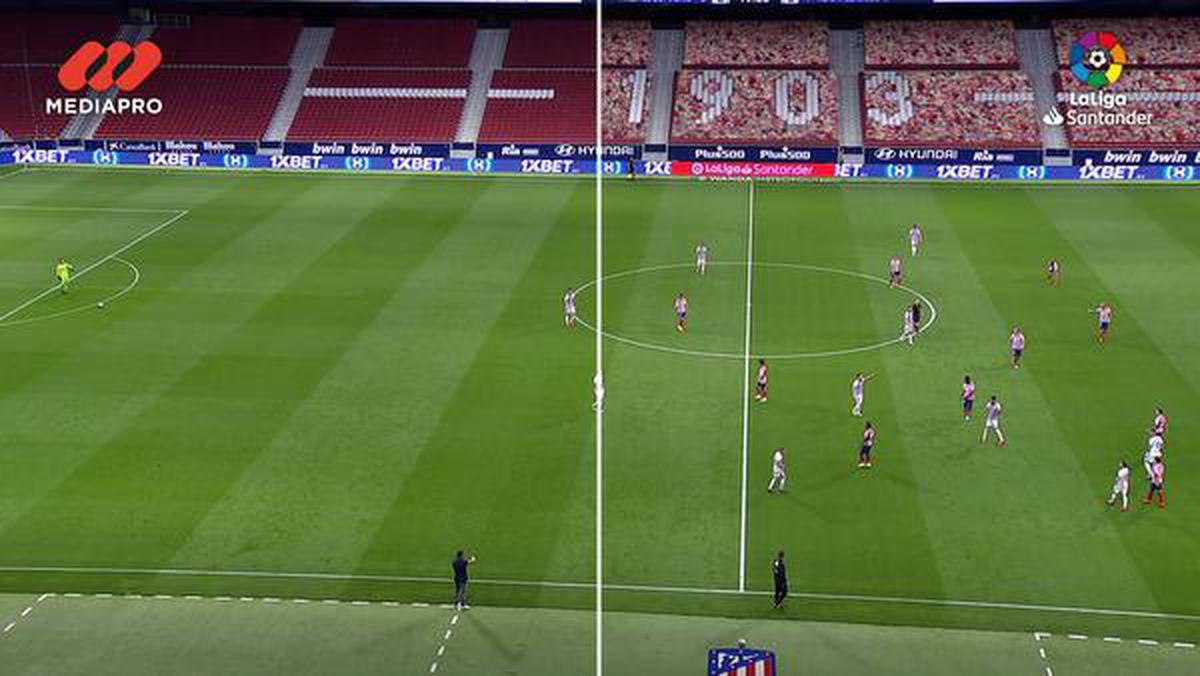 Two major sporting events are ahead for us in September: football championship Premier League and, of course, the Indian Premier League. Premier League and Sky Sports are reportedly exploring the potential for CGI fans while IPL is unlikely to take on this additional measure. But other technologies are touted to be a part of games.

As the world slowly eases up lockdown and quarantine measures, can one assume the future of this spatial awareness tech may no longer be as prevalent? “Now that our customers have become familiar with the benefits of virtual technology, not just in sports, but also in day-to-day life, we hope they will become more open to using virtual technology within their productions,” Jonathan points out.

Recently in May, OZ Sports announced OZ Arena, a way for people at home to include themselves in a sports event, through AR. While not exactly CGI, it does leverage the same core technologies (AI, visual effects, sound immersion) to help bring the fans ‘closer’ to the fun.