A pillar of warm air and vapour bursts out of the ocean, reaching three storeys into the sky. It is an exhalation from the blowhole of a blue whale – the largest animal to ever exist, and yet a species hunted nearly to extinction by commercial whaling.

While whaling has decreased dramatically over the past century, six of the 13 great whale species remain endangered and continue to face multiple human-induced threats, one of which is massive cargo ships. Busy shipping routes often traverse whale habitats in coastal areas, and ships can unintentionally hit and kill whales while the animals are feeding, migrating, resting, mating or socializing.

Not only beautiful and awe-inspiring, whales are important components of a healthy and productive planet. They promote thriving ocean food webs, support coastal economies, and even help mitigate climate change. An economic evaluation found that when combining whales’ carbon and ecotourism benefits, a single whale is worth more than $2 million. At the same time, marine shipping is the lifeblood of the global economy, moving 90% of the world’s goods – and maritime traffic is conservatively expected to triple by 2050. To strike a balance between a healthy planet and a strong economy, whales and ships must coexist in an increasingly busy ocean. 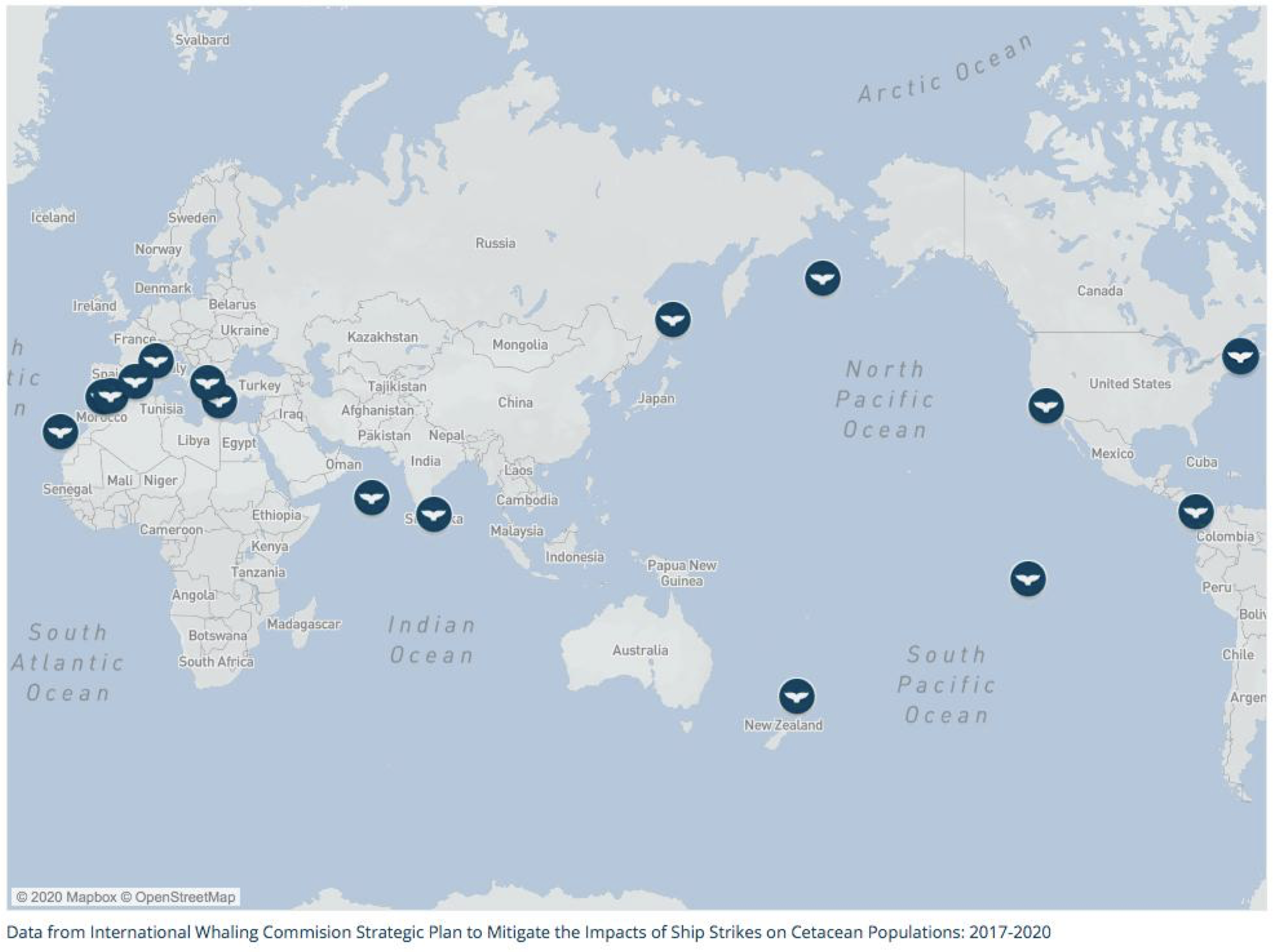 Yet from the coasts of the US to Sri Lanka to the Mediterranean Sea, whale-ship collisions are occurring at increasing rates. The North Atlantic right whale is a distressing sentinel for the potential fate of whale populations globally if we fail to quickly implement solutions to prevent fatal strikes from occurring; it has been deemed ‘critically endangered’ by the IUCN, and some die every year from ship collisions. With only 400 members of this species remaining, every whale counts.

Off the coast of California, 2018 and 2019 were the worst years on record for whale-ship collisions with 27 reported strikes across all whale species. Even so, scientists estimate that only 5-17% of whale carcasses are detected and recorded, so the actual number of ship strike victims is likely much higher. Scientists estimate that in reality, 18 endangered blue whales are likely killed by vessel collisions on the West Coast of the US each year. To put this in context, the National Oceanic and Atmospheric Administration has determined only one to two blue whales can die each year from human-caused incidents (such as ship collisions or fishing gear entanglements) for the population that visits California to recover to a sustainable level.

Despite these trends, there are ways to combat the problem. Research has shown that reducing ship speeds is one way to protect whales from collisions, for example. However, a large container ship can be 1,000 ft long and 15 storeys tall, making it very difficult for captains and crews to spot whales with enough time to respond. Ships need to know when and where to slow down. 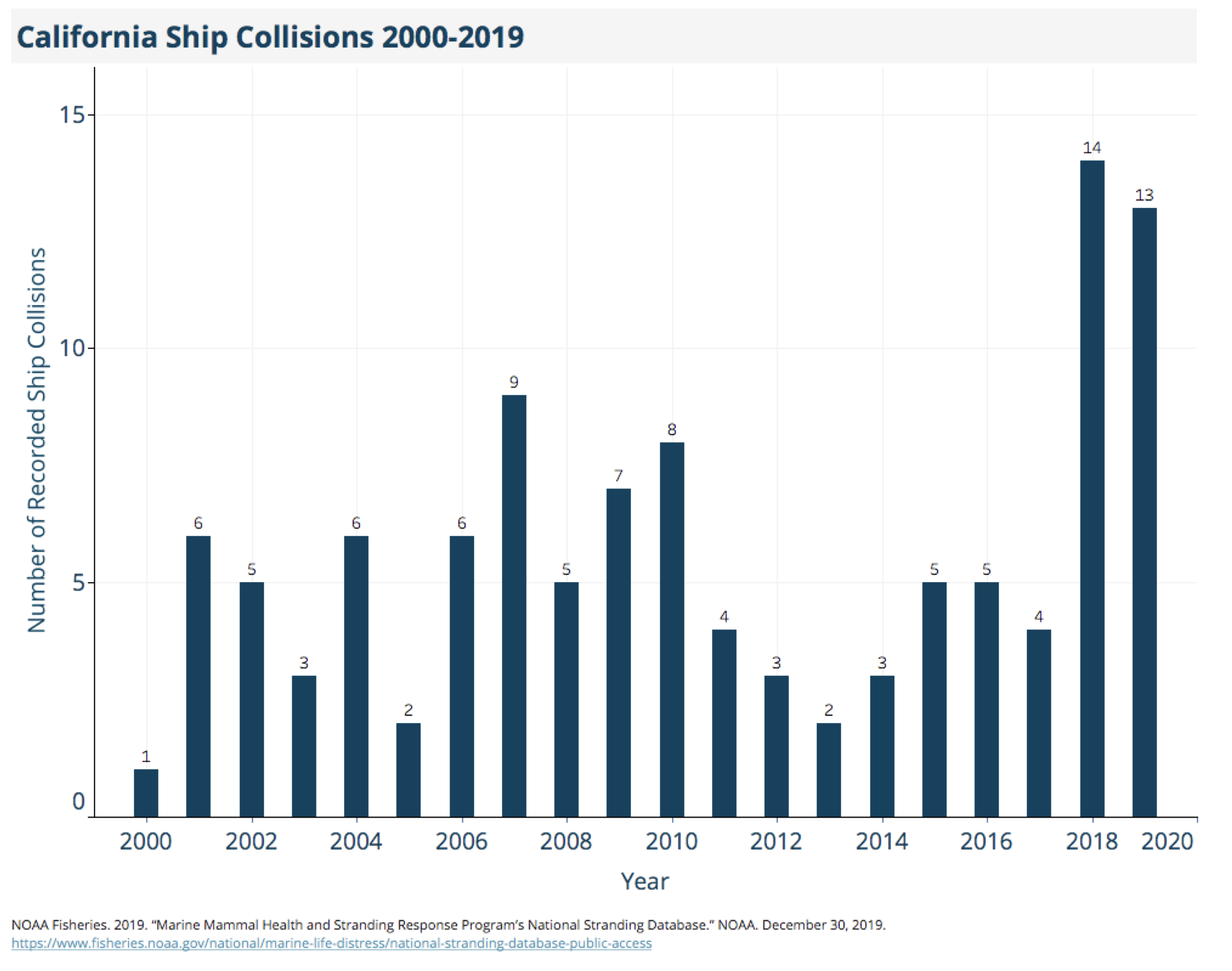 Tech to the rescue

Could digital technology provide a solution? A team of leading ocean scientists from the Benioff Ocean Initiative, University of California, Woods Hole Oceanographic Institution, Texas A&M University at Galveston, the University of Washington, and National Oceanographic and Atmospheric Administration have developed Whale Safe, a new whale-detection system that will empower mariners with the data they need to reduce the risk of whale-ship collisions.

Whale Safe incorporates three technologies: an AI-powered underwater sound recording system that detects whale calls; a mobile app used by community scientists to record whale sightings; and big data models that provide near real-time forecasts of whale feeding grounds based on data like ocean temperature and circulation. Data delivered by the new technology will let ships know when whales are nearby, so they can slow down to protect whales while safely transporting goods around the world.

The Whale Safe system also integrates ship-tracking data and allows the public to monitor which ships and companies are slowing down to protect endangered whales, bringing transparency to transportation within supply chains. Ongoing monitoring of ship strikes and shipping speeds will be used to evaluate Whale Safe’s success.

The first Whale Safe system has been deployed off the coast of California in the Santa Barbara Channel near the Ports of Los Angeles and Long Beach, one of the busiest port complexes in the world. The shipping lanes around these ports, like many others around the world, also overlap with a biologically rich feeding ground for endangered whales. This region has been identified as an area of concern since 2007, when five endangered blue whales were killed by ship collisions in the channel. If successful, Whale Safe could be replicated in other ship strike hotspots around the world to empower decisions that protect whales while supporting efficient maritime commerce.

Whale Safe is part of a growing ecosystem of ocean technology that offers promise for accelerating smart solutions for a sustainable blue economy. As the world enters the Great Reset, it is essential that we harness these tools for the benefit of both people and planet.
Source: World Economic Forum