It’s entirely possible you missed it, but on Oct. 2 at 9:16 PM ET, you lifted off for the International Space Station. Just over two days later, you docked successfully—and it’s a good thing you did. You’ve got a spacewalk planned for later this year.

O.K., technically speaking, you didn’t go anywhere at all, and unless you’re actually a highly-trained astronaut, you certainly shouldn’t be planning for a real-deal spacewalk—or extravehicular activity (EVA)—any time soon. But you could very much share in the experience when actual ISS crew members venture outside of the station for one of the most exciting and dangerous experiences an astronaut can have.

That’s because something special was included among the ISS-bound cargo on the uncrewed Cygnus supply vehicle that took off from Wallops Island, Va. earlier this week: the first-ever 3D, virtual reality camera designed to operate in the vacuum of space. It’s the product of a partnership between the Montreal-based Felix & Paul Studios (an Emmy Award-winning creator of immersive entertainment experiences), TIME Studios (TIME’s Emmy Award-winning television and film division) and Nanoracks (the leading provider of commercial space access).

This photograph was taken inside the mobile clean room attached to Northrop Grumman’s Antares rocket as it rests atop Pad 0A at NASA’s Wallops Flight Facility in Wallops, Island, Va. on Sept. 28, 2020. Mechanical Technician Stephen Busch, left, and Jennie Wang, Lead Integration and Test Mechanical Engineer for Northrop Grumman, load the cargo bag containing the Space Camera through the hatch of the Cygnus Pressurized Cargo Module. The vehicle successfully docked with the International Space Station on October 5.

The new camera is not the first one TIME, Felix & Paul and Nanoracks have sent to the ISS. In 2016, TIME and Felix & Paul were independently exploring the possibility of such a project, and ultimately decided to collaborate rather than compete. The decision bore fruit when, just two years later when we launched a camera built to operate inside the ISS. It’s been shooting scenes of station life for TIME’s The ISS Experience, set for release on Oct. 22 for virtual reality headsets via the Oculus Store. The episodes will also be available later in the fall in select domes and planetariums around the country, and in 360° mobile format through 5G-enabled wireless carriers.

Designing a multi-lens camera that could shoot in 3D and VR and function in the microgravity of low-Earth orbit was challenge enough. Designing one that can function in the extreme environment outside the ship—where temperatures fluctuate from 121º C (250º F) to -156º C (-250º F), and where 16 sunrises and sunsets a day can produce extreme flaring on the camera’s lenses—was an order of magnitude harder.

The camera was hardened by Nanoracks to withstand not only the temperature variations and the solar flaring, but also ultraviolet radiation, charged particle (ionizing) radiation, plasma, surface charging and arcing, and impacts from micrometeoroids and orbital debris. “This may well be one of the most complex and exciting projects that we have ever worked on at Nanoracks,” says Conor Brown, senior manager of the company’s program office. 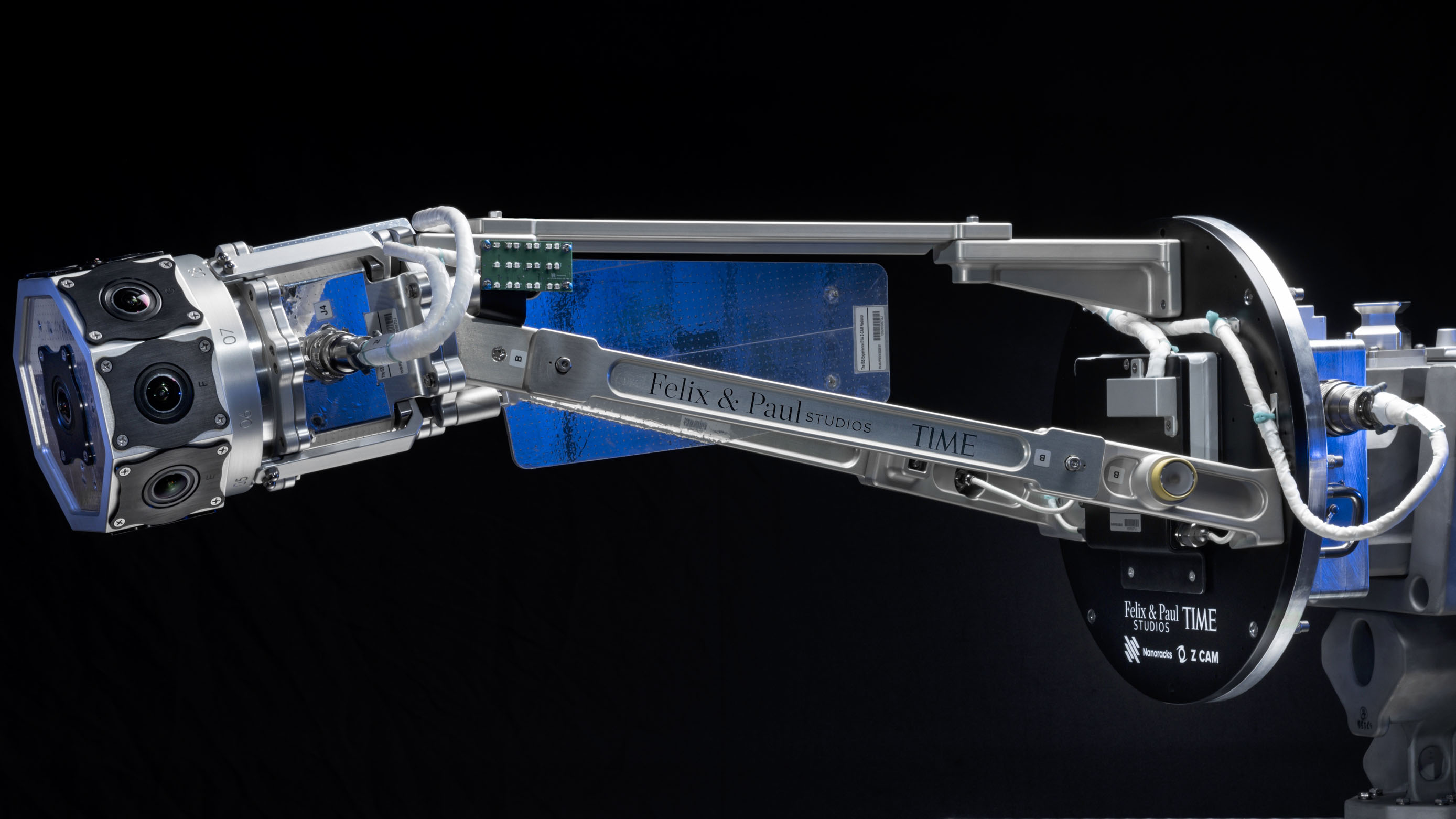 Felix & Paul Studios’ state-of-the-art Space Camera has been specially hardened by Nanoracks to withstand the harsh conditions of space. It can store approximately 15 hours of 3D, 360-degree footage.

Adds Jonathan Woods, executive producer for The ISS Experience at TIME Studios and Emmy-winning producer of A Year in Space: “Getting this camera to space was the culmination of five years of exceedingly hard work. Only 228 humans have ever conducted a spacewalk. It’s one of the most thrilling yet perilous tasks an astronaut can undertake.”

The astronauts whose spacewalk will be recorded for The ISS Experience will not have to worry about managing the camera themselves. Instead it will be mounted on the Canadarm 2, the station’s 17.6 m (58 ft) remote manipulator arm that can be operated by astronauts within the station, capturing the experience of those who are working outside. TIME will provide updates on when the first EVA to be filmed will take place, and when the footage will be released for viewing. The experience should be a profound one.

“Our space camera,” says Félix Lajeunesse, co-founder of Felix & Paul Studios, “purpose-built to capture this historic event in fully-immersive 3D, brings us one step closer to our goal of taking billions of minds to space, and having them experience a spacewalk as if they were astronauts themselves.”

Get our Space Newsletter. Sign up to receive the week’s news in space.

For your security, we’ve sent a confirmation email to the address you entered. Click the link to confirm your subscription and begin receiving our newsletters. If you don’t get the confirmation within 10 minutes, please check your spam folder.