Tyme Technologies, Inc. (NASDAQ:TYME) is an emerging biotechnology company developing Cancer Metabolism-Based Therapies (CMBTs) that are intended to be effective across various solid tumors and hematologic cancers, while having low toxicity profile. The company’s therapy is designed to compromise the cancer cell’s innate metabolic weaknesses, resulting in cell death through oxidative stress and exposure to the body’s natural immune system. The mechanism of action of CMBT is naturally more effective and safer than other therapies. 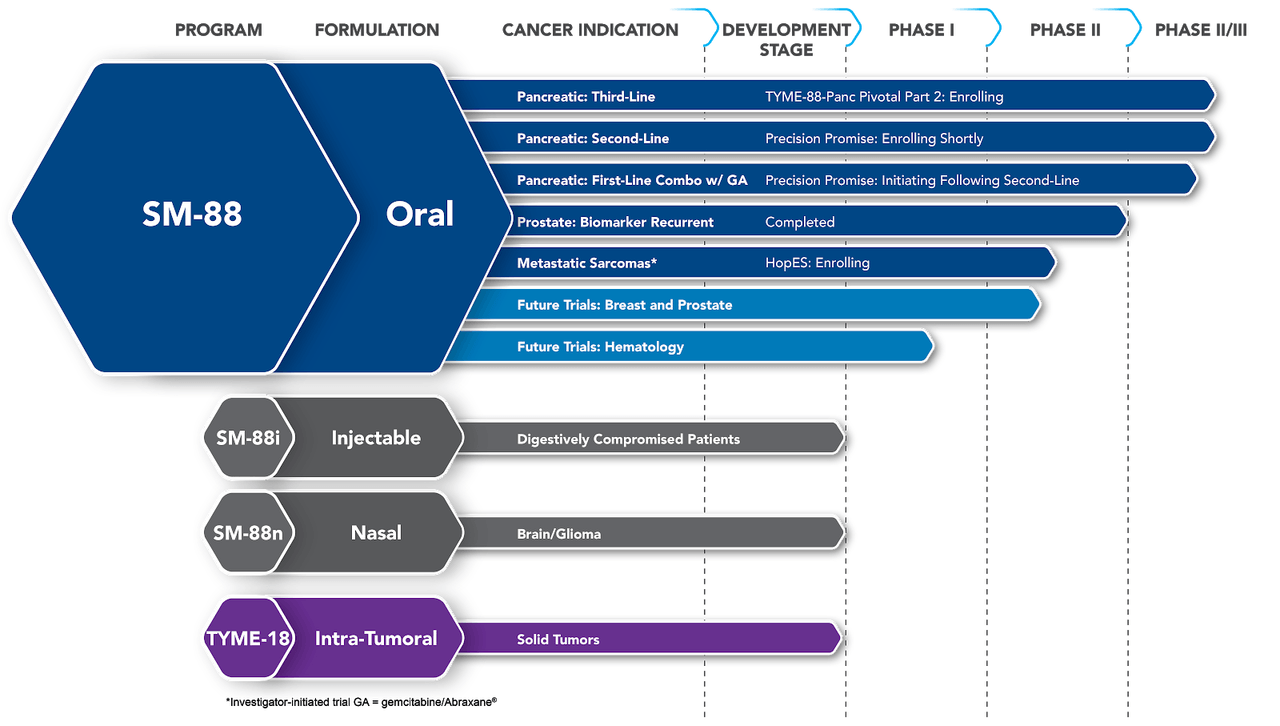 The company’s lead candidate at an advanced stage is SM-88, “an oral investigational modified proprietary tyrosine derivative that is hypothesized to interrupt the metabolic processes of cancer cells by breaking down the cells’ key defenses” leading to cell death. Clinical trial data to date have demonstrated that “SM-88 has achieved confirmed tumor responses across 15 different cancers, both solid and liquid tumors, including pancreatic, lung, breast, prostate, sarcoma and lymphoma cancers with minimal serious Grade 3 or higher adverse events,” which is believed to be rare for investigational compounds. A pivotal phase 2/3 trial TYME-88-PANC is ongoing to evaluate SM-88 used with MPS (methoxsalen, phenytoin, sirolimus) in patients with metastatic adenocarcinoma of the pancreas whose disease has progressed or recurred and have received two lines of prior systemic therapy. Part 1 of the study is completed, and part 2 is currently enrolling 250 subjects, to be randomized 1:1 to the SM-88 arm (125) or Physician’s Choice of therapy for the Control Arm (125).

Data from part 1 of the phase 2 study TYME-88-PANC was presented at ESMO in September 2019.

TYME-88-PANC is a multicenter, open-label, phase 2/3 multi-center study under a Tyme IND with FDA input prior to study initiation. The participants in part 1 of the study were 49 heavily pretreated subjects with “radiographically progressive metastatic pancreatic cancer who had significant disease related morbidity before receiving Tyme’s investigational agent SM-88” used with MPS. Over 80% of the subjects had received at least two prior lines of therapy. 38 of the 49 subjects were evaluable for efficacy as per the protocol. Two dose levels of SM-88’s metyrosine-derivative were evaluated.

The primary outcome of median overall survival as of April 2019 was 6.4 months. This survival result compares very favorably to the analysis of 19 prospective trials in pancreatic cancer, where the median reported survival after progressing on second-line therapy was 2.0-2.5 months. The time frame for overall survival is from the date of randomization until the date of first documented progression or date of death, whichever came first, assessed up to 60 months.

CBR was durable with the majority of subjects remaining in stable disease or better for more than 7 months after being treated with SM-88.

Median reduction in CTC burden in evaluable subjects was 63%. 10 of 24 subjects with available results reaching an 80% reduction or greater in CTCs demonstrated a 60% decrease in risk of death (hazard ratio = 0.40).

SM-88 used with MPS was well tolerated with only 4% of subjects (2 of 49) experiencing serious adverse events (SAEs – abdominal pain, arthralgia, and hypotension) deemed at least possibly related to SM-88. One patient with reported SAEs continued on treatment.

The data demonstrated favorable overall survival trends, well tolerated safety and better quality of life in patients undergoing third-line treatment for pancreatic cancer. Part 2 of the pivotal trial is still enrolling, and the study is expected to complete by 12/31/2020.

Tyme has an intellectual property portfolio of 194 patent applications granted and/or pending worldwide. The patents encompass SM-88 as well as inventions that fight cancer and aid in the creation of novel mechanisms to further that effort. The company believes they have no need to license any technologies for SM-88 to be commercially viable. Also, the company owns all the IP necessary for SM-88 to perform as intended and to be commercially marketed, once all applicable regulatory requirements have been obtained. Additionally, the drug substances utilized in SM-88 are not covered by any patents that would impede company’s use of such drug substances. The company has currently one domestic trademark: CMBTs (cancer metabolism-based therapies).

The company currently has a research collaboration with Mayo Clinic and NYU Langone Health and could establish additional collaborations in the future.

The number of people afflicted with cancer is estimated to be nearly 1.8 million in the United States and nearly 18.2 million worldwide. It is expected that nearly 610,000 people in the U.S. and nearly 9.6 million worldwide, who are in advanced stages of cancer, will die this year. Approximately 20 million people will be living with cancer in the U.S. by 2026. (Source: company website).

The focus of this article is advanced pancreatic cancer, which is difficult to treat and has the lowest survival rates among all cancer types. Relative 5-year survival is 8% across all patients with pancreatic cancer and is less than 3% for those with advanced disease. Median survival in the end-stage of the disease is 2 to 3 months. New pancreatic cancer cases account for only 2.1% of all newly diagnosed cancers. However, it is the fourth most common cause of death for cancer afflicted patients in the US.

Over 57,000 cases of metastatic pancreatic cancer are diagnosed annually in the U.S. The U.S. FDA granted Orphan Drug Designation to SM-88 in August 2020, as a potential treatment for pancreatic cancer.

Tyme’s lead candidate SM-88 presents a unique therapy by attacking the metabolic system of the cancer cells and killing them. There is no approved product or competition for the indication of third-line pancreatic treatment. The pivotal phase 2/3 trial will complete by 12/31/2020. Topline results can be expected in 1H-2021, or possibly 1Q-2021, as the company’s fiscal year ends in March. The company expects sales to start near the end of 2022 with a projection of $2.5 million. Sales projection for 2023 is ~$27 million. EPS is estimated to range between -0.20 and -0.26 through the next three years. Catalysts could be expected in 1Q-2021 (DATA), 2H-2021 (PDUFA) and 1H-2022 (approval).

The share is near 52-week low at $1.03, while the market estimates a target price of $8.75. The company has a mixed shelf open through the next couple years to offer shares worth $245 million. There is a risk, though, with the co-founders Steve Hoffman and Michael Demurjian holding 21.5% and 19.4%, respectively, of the company’s outstanding common stock. Additionally, Steve Hoffman is granted perpetual, exclusive non-royalty bearing license rights with respect to certain patents and patent applications that the company uses for SM-88 in all fields other than in connection with the treatment of cancer. Further, in their employment agreements, Mr. Hoffman and Mr. Demurjian agreed that all intellectual property they develop or had developed during their employment with the company will be the property of the company, but only with respect to the treatment of cancer in humans. The company plans to expand into cancer therapeutics in certain animals, but obtaining the relevant IP rights from them cannot be assured.

TYME is a microcap with the promise of a disruptive therapy; hence, it is critical to ask – why doesn’t the market appreciate this stock as much as it should? One obvious reason is lack of funds; the company simply does not have enough money to survive more than a few more months. However, if the market was receptive, dilution would not have been necessary – so, the question remains – why isn’t the market more enthusiastic? One reason is probably the nature of the indication targeted – a lot of people die in end stage pancreatic cancer. However, it is not exactly the most common cancer. The company’s revenue projection reflects this low patient population. That is probably a major reason the market lacks enthusiasm.

Trading near 52-week low because of shelf offering, TYME has a very strong chance of dilution. However, it has a unique product targeting late stage pancreatic cancer, strong IP, solid midstage data, no debt, good insider interest. Likely good stock to buy and hold for approval.

Thanks for reading. At the Total Pharma Tracker, we do more than follow biotech news. Using our IOMachine, our team of analysts work to be ahead of the curve.

That means that when the catalyst comes that will make or break a stock, we’ve positioned ourselves for success. And we share that positioning and all the analysis behind it with our members.